Sohel is a 2016-2017 Delfino Leadership Institute member and DRUM member-leader.
Back in January, worker leaders from the WCF launched the Freedom Cities Movement with the vision of transforming New York into a city that truly provides our communities with both safety and freedom. Their vision of a Freedom City includes worker rights for all, an end to criminalization of people of color and immigrants, investments in people and the planet, divestment from the military and mass incarceration, and gender justice. Freedom Cities centers on redefining safety in the workplace, the streets, and their homes; and it lifts up a divest/invest framework that demands for reparations and investment in our communities. On Saturday February 18th, worker leaders in the Delfino Leadership Institute met again as part of the 2016-2017 cohort in order to strategize and advance the FC Movement.
In any movement, base building is key, which is why it is a central piece of Enlace’s IOA — Integrated Organizing Approach. As movement-leaders, the cohort participants came to the conclusion that in order to bring the vision of Freedom Cities into reality, they would need to be building the base. As Delfino participant and DRUM member-leader, Sohel says, “If there are no people, there is no movement.” At the training, workers learned one of Enlace’s IOA frameworks called the RAP. Participants developed and practiced a rap they would use to bring people into in the movement. In addition, they also developed a strategy outlining the next steps with the people they recruit. According to Sohel:
As leaders in NYC, we need to have the knowledge of how to plan, how to strategize, how to bring people together. It’s essential for our movement. We learned something special at Delfino; how to make our movement strong. Our confidence is growing, which is especially important when you are fighting an invisible monster. We don’t know what’s going to happen next, so we need to be confident in our abilities. Our insides need to be strong; this training gave us confidence in our abilities to lead.
Delfino is a space where workers not only develop their organizing skills but also a place where their confidence grows, where their leadership is developed, and where cross-community solidarities are fostered. Sohel had this to say:
Confidence builds in the subconscious, you don’t realize it but [through Delfino] I feel like I’m getting stronger. I am inspired by the other workers like, Heleodora and Eliana, who are encouraging and influential — it’s amazing to see their leadership. At the training, we get to bond with people from other organizations. We get to share our cultures; I get to see your culture and you get to see mine.
Whats Next:
Workers are organizing and mobilizing for International Worker’s Day where they plan on centering the Freedom Cities framework. In preparation for May Day, the Federation is holding a three day retreat in early April where the workers will be strategizing and coming up with proactive next steps in order for workers and allies to continue engaging in Freedom Cities. 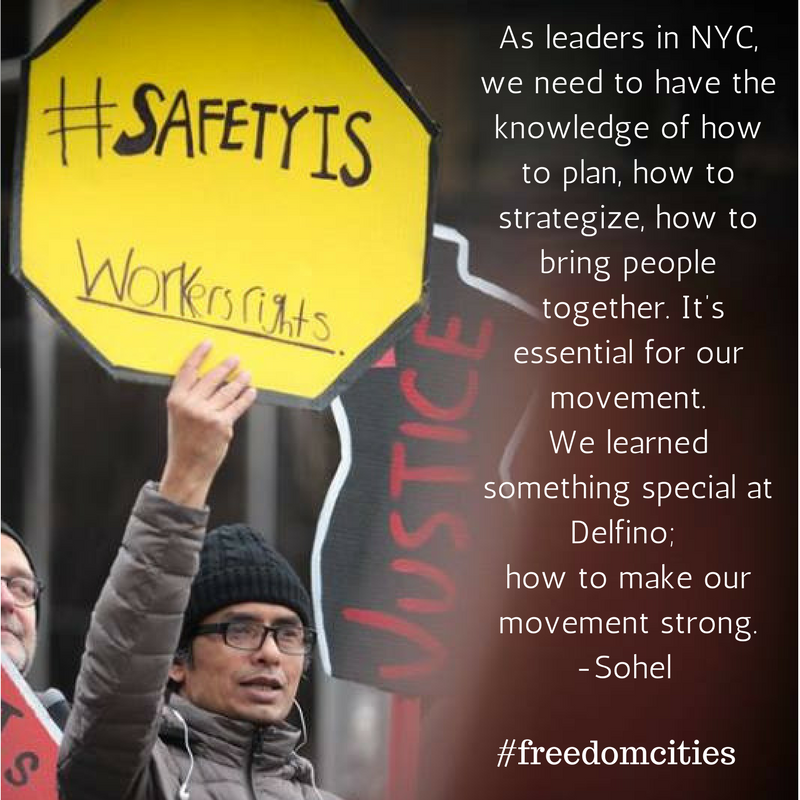