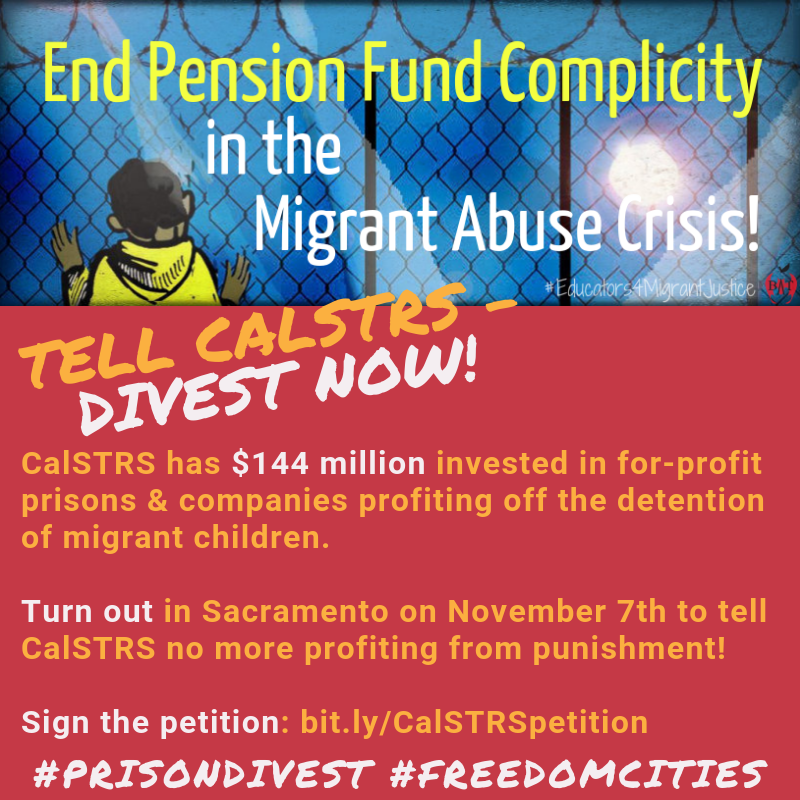 Sacramento, CA – On Wednesday November 7th, the CalSTRS Board will have an opportunity to stand with migrant families and end their financial complicity in crimes against humanity. Last week, CalSTRS released a report on for-profit prison companies that found that divesting from CoreCivic and GEO Group, the largest for-profit prison companies in the country, would be consistent with their fiduciary duty
Hundreds of CalSTRS members have signed petitions calling for divestment from CoreCivic and GEO Group, termed “migrant abuse companies.” The latest petition from Educators for Migrant Justice was signed by nearly 300 CalSTRS members, as well as California organizations, including California Immigrant Policy Center, Freedom for Immigrants, Afrikan Black Caucus, and Advancing Justice – Asian American Law Caucus; advocates will present the petition and make public comments at Wednesday’s board meeting in Sacramento.
CalSTRS, the world’s largest educator-only pension fund, has faced enormous backlash from members after its investments in four migrant abuse companies were revealed on social media. After dozens of educators protested at CalSTRS’ board meeting in July, CalSTRS’ Chief Investment Officer initiated a review of the pension fund’s exposure to for-profit prison companies, which led to Thursday’s report.
“With the report’s conclusion that divesting from for-profit prison companies CoreCivic and GEO Group would have a negligible impact on CalSTRS’ portfolio performance, coupled with widespread evidence of both companies’ human rights abuses, CalSTRS’ board has a responsibility to vote in favor of divesting,” said Emily Claire Goldman, the Founder and Director of Educators for Migrant Justice.
If the Board chooses to divest, they will join city and state pensions across the country that have taken a stand against unconstitutional and inhumane practices at the expense of migrants and communities of color.
“We hope that CalSTRS’ will build on its socially responsible investing track record and divest from for-profit prisons” said Daniel Carrillo, Director of Enlace. “As the refugee caravan approaches, we need to show that we do not stand with Trump, but that we stand with asylum seekers and refugees around the world.”
###
Educators for Migrant Justice is a grassroots advocacy campaign to end pension fund complicity in the migrant abuse crisis. Contact Emily Claire Goldman for more information.
Enlace works to create a world where safety means investment in people and planet, and to end the punishment based criminal and immigration systems. Since 2010, they have led the Prison Industry Divestment Campaign to pressure institutions and politicians to cut ties and divest from the industry. Contact Daniel Carrillo for more information.