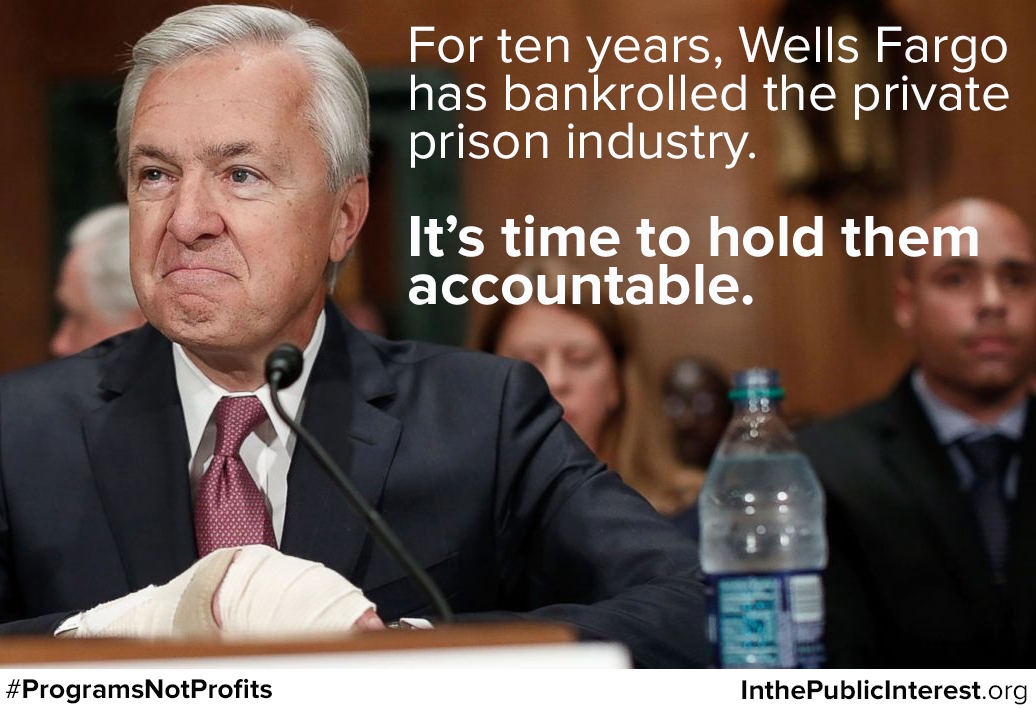 As America’s incarcerated and detained populations have boomed in recent years, the business of owning and operating prisons and jails has grown into a multibillion-dollar industry. A new report uncovers which Wall Street banks finance the industry’s two leaders, CoreCivic (formerly “Corrections Corporation of America [CCA]”) and GEO Group.
The report, based on an analysis of filings with the SEC over the past ten years, shows that six banks have played large roles in bankrolling CCA and GEO Group–Wells Fargo, Bank of America, JPMorgan Chase, BNP Paribas, SunTrust, and U.S. Bancorp.
In the report, The Banks That Finance Private Prison Companies, In the Public Interest reveals how these banks profit from providing credit, bonds, and loans to private prison companies. Download report.
“Private prison companies aren’t the only ones profiting from the pain and trauma caused by mass incarceration and the criminalization of immigration, Wall Street banks are too,” said In the Public Interest’s Executive Director, Donald Cohen. “By financing these companies, banks like Wells Fargo are profiting at the expense of our most vulnerable communities, especially those of color.”
The report’s key findings include:
Six banks play large roles in financing CCA’s and GEO Group’s debts—Wells Fargo, Bank of America, JPMorgan Chase, BNP Paribas, SunTrust, and U.S. Bancorp.At the end of June 2016, CCA had total debts of $1.5 billion and GEO Group had total debts of $1.9 billion.CCA and GEO Group have relied on debt financing from banks to expand their control of the criminal justice and immigration enforcement systems by acquiring smaller companies that provide “community corrections” services, like residential reentry and electronic monitoring.Banks profit from collecting fees and interest on credit, bonds, and loans, as well as from owning or investing their clients’ money in shares of CCA and GEO Group.Financing enables both CCA and GEO Group to operate as real estate investment trusts (REITs), which reduces their income taxes.
The report is released at a time when banks are facing increased pressure to cut ties with the private prison industry. A number of organizations lead by the ReFund America Project recently have joined the ForgoWells campaign calling for city councils, state legislatures, and other public bodies to boycott Wells Fargo due to its profiting from private prisons among other reasons. On December 7, 2016, the city council of Portland, Oregon, plans to vote on divesting from Wells Fargo and JPMorgan Chase because the banks finance of private prison companies.
The report concludes with a call for banks to stop financing the private prison industry.