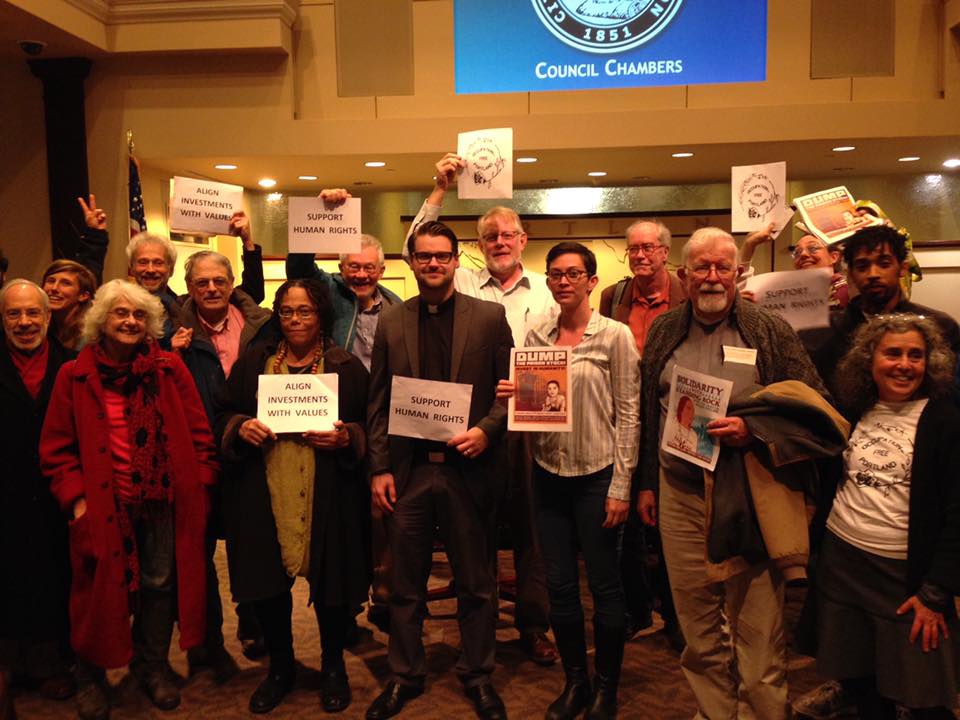 Next Wednesday April 5th, the City Council of Portland will hear public testimonies on why we need to keep the Socially Responsible Investment (SRI) committee and why the SRIC’s Do-Not-Buy-List should be adopted.
Hyung Nam, a Portland school teacher and citizen member of the Socially Responsible Investment Committee, just wrote a powerful Letter to The Oregonian on why Portland needs to decide to do the right thing with its investments on April 5th:
We need to reinstate my committee. While other cities have severed ties with the publicly shamed Wells Fargo, for example, Portland holds more than $70 million in Wells Fargo securities.
Making sure that Portland’s investments reflect our values as a sanctuary city are more important than ever. Socially responsible investing requires a diverse group of people doing independent research, taking public input, and deliberating publicly and democratically.
We must be principled and courageous.
Read Hyung’s whole letter here.
Please call or email at your earliest opportunity the members of Portland’s City Council to ask them to continue the city’s Socially Responsible Investments policy and affirm the recommendation of the Socially Responsible Investments Committee to place four companies on the City’s Do-Not-Buy list. The four companies are prison profiteer Wells Fargo, Caterpillar, Nestle, and Amazon.
We are in an emergency situation because the City is threatening to end the SRI policy and leave our investment decisions to the City Treasurer and a Wall Street firm. This is not only an undemocratic maneuver to prevent the community from having a say in how our tax dollars are invested but also prevents human rights violations from being considered in the City’s investment portfolio.
Below please find contact information and talking points for your phone calls or emails. Please contact the Council as soon as possible and then plan to attend the March 29 City Council meeting at 2 pm at the Portland Building, 1120 SW 5th Ave. right next to City Hall.
Commissioner Nick Fish: Nick@portlandoregon.gov 503-823-3589
Commissioner Amanda Fritz: Amanda@portlandoregon.gov 503-823-3008
Commissioner Dan Saltzman: Dan@portlandoregon.gov 503-823-4151
Commissioner Chloe Eudaly: chloe@portlandoregon.gov 503-823-4682
Mayor Ted Wheeler: mayorwheeler@portlandoregon.gov 503-823-4120
Talking Points:
1. We need a public democratic process for making decisions about investments. It’s taxpayer money, and the community has a right to have a voice in how its money is invested. That’s why the Socially Responsible Investments policy was created in the first place. Keep the policy in place and keep the Socially Responsible Investments Committee.
2. Make our actions consistent with our words. The City Council unanimously opposed the Dakota Access Pipeline (DAPL) and declared Portland a Sanctuary city. How can the City then invest in Caterpillar and Wells Fargo? Caterpillar helped build DAPL and Wells Fargo helped finance it. Wells Fargo invests in the private prison companies that run immigrant detention centers and Caterpillar is President Trump’s chosen contractor to build the anti-immigrant Wall on our southern border.
3. Wall Street shouldn’t be in charge of our investments. Under the proposed new policy, the City Treasurer will rely on reports from MSCI, an offshoot of the failed Morgan Stanley investment bank.
4. This process is not transparent. MSCI reports are proprietary and can’t be seen by the public. Portland taxpayers will have no idea what these reports say.
5. Portland should join Seattle and other cities across country and take a stand for indigenous rights, Palestinian rights, immigrant rights, prisoner rights, and universal human rights.
Our alternative proposal–collaborated on by the Portland Prison Divestment Coalition, Occupation Free Portland and DefundDAPL groups–can be found here.