What is a Freedom City? 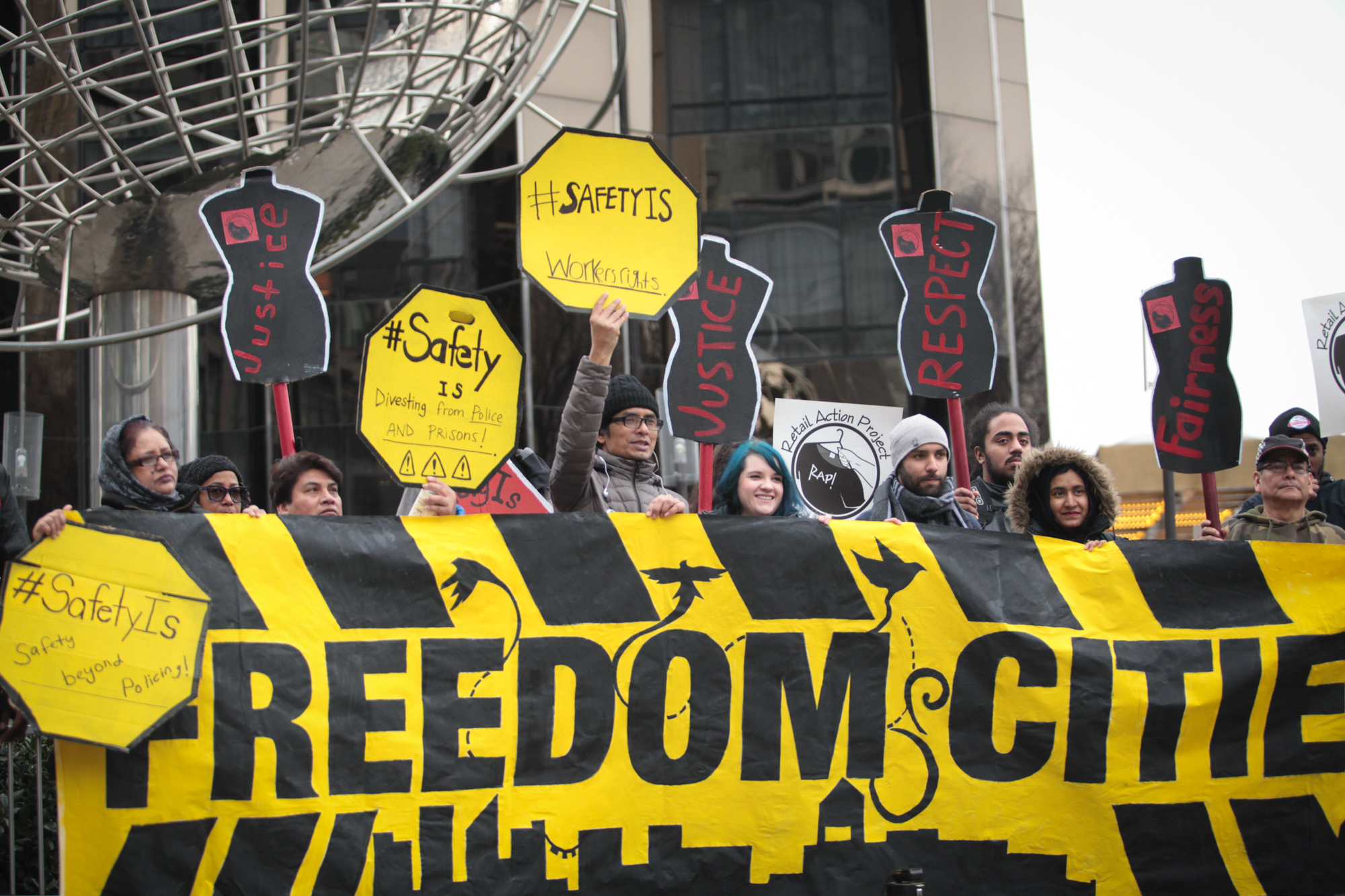 Freedom Cities demand that our communities have the resources they need to thrive. It’s about making entire cities, towns, and communities safe for immigrants, Black people, Muslims, workers and all oppressed communities. We believe we all deserve to live with dignity and have the opportunity thrive without fear of physical or economic violence at the hands of the corporations, vigilantes or government.
Freedom Cities is a comprehensive framework that includes many of the demands that we’ve seen come out of our campaigns over the last decade including sanctuary, investments in humanity and our planet, safety beyond policing, real community control, worker rights, community defense, and divestment from militarization and other programs that oppress our people.
How did the Freedom Cities idea come to be?
The idea for Freedom Cities came from the leadership of people directly affected by policies that jail, displace, and economically marginalize Black and Brown communities.
Workers participating in a training by the New York Worker Center Federation created the idea in 2016. Freedom Cities was born from workers discussion on how to not only resist state and corporate violence, but build a vision of the world we want. 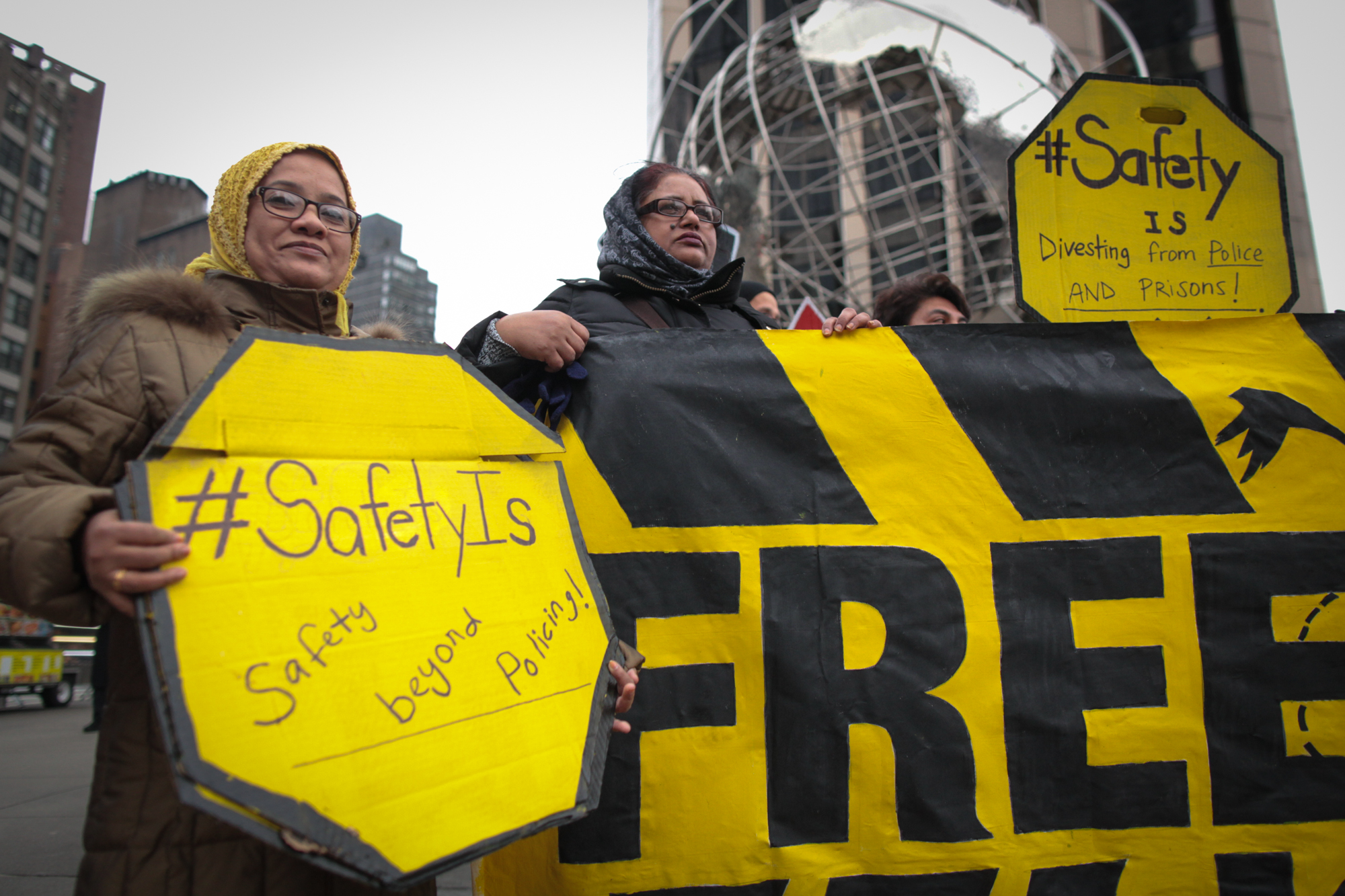 What is the Freedom Cities framework?
Freedom cities is a new visionary framework and we are still in the process of shaping demands. At our first convening, participants aligned around a preliminary set of demands which included:
Safety Beyond Policing – How do we get cities to divest from policing and militarization and to invest in programs that produce real public safety including mental health services and restorative practices. This includes campaigns to end practices such as broken windows.Economic Justice and Workers Rights – Labor protections, jobs and employment opportunities, efforts to combat discrimination, increased wages, and the right to organize.Investment in People and Planet – Efforts to divert resources toward the basic needs of our communities including housing, education, health, good food and safety net programs as well as to protect our communities from environmental injustices.Community Control – Real control of the institutions that people interact with daily, including police and other public agencies.Community Defense – Establish systems of self-defense in neighborhoods for our rights and dignity like Hate Free Zones to combat Islamophobia, misogyny, homophobia, and transphobia.Global Justice – our struggles for liberation have always been linked with others across the world, and our identities and migration histories link us globally. We are part of an international movement of those who believe that everybody deserves safety and freedom.
Why not Sanctuary?
Freedom Cities is about finding new language to reflect a new moment. The term “sanctuary” itself has been watered down and coopted by political leaders who don’t really know what our communities need. The concept of sanctuary as municipalities refusing to invest local resources in immigration enforcement, is far from enough to keep us safe. Where is the sanctuary when ICE is setting up checkpoints and conducting raids in our communities? Where is the sanctuary for folks impacted by the War on Drugs, racial profiling, or police violence? Where is the sanctuary for people with convictions? Where is the sanctuary for folks impacted by the War on Drugs?
Freedom Cities is about an expansive vision that incorporates all that our communities deserve. We refuse to leave anyone behind. Freedom Cities believes, as Audre Lorde said, “ there’s no such thing as a single issue struggle, because we don’t live single issue lives.” We are an inclusive and intersectional movement.
A Freedom City visibilizes the experiences of those most impacted by state violence: particularly Black, Muslim, trans, and poor communities, not just those that present the most sympathetic public narratives.
Our communities are exposed daily to Broken Windows policy which is about over-policing and making small nuisances into crimes, opening the door to police brutality and deportations.
When we demand safety for immigrants, we are also unequivocally demanding safety for all people of color, for women, for queer and trans people, for gender nonconforming people, for Muslims, for people with disabilities, for people with criminal convictions, and for all oppressed people.
Sanctuary now, leaves people out. Sanctuary in the 80s came about when self-determined Central American war refugees and torture victims were using sanctuary as a political tactic to get political refugee status. The US did not give it to them because that would have made the Reagan government look more guilty for helping to fund wars in the region. Instead the administration delivered the 1986 laws which gave some migrants legal status.
Trump’s hunt for people with convictions tears apart families and opens the door for everyone to be exposed to traumatic raids at home and in the workplace. Cities and elected officials are complicit with Trump’s deportation machine when they are not doing away with broken windows and are collaborating with ICE.